Happy August! Another exciting month in our office as we start to settle into having THREE doctors in the office. We’ve had many questions regarding how our doctors are working together- Drs. Hubbel, Johnston and Leguard all treat patients the same way, and patients are able to see the doctors interchangeably. If you previously saw Dr. Johnston, and you see Dr. Leguard for a few visits or vice versa, that is no problem. Our doctors don’t take your “switch” personally, we are trying to provide you all with the most availability in terms of when our doctors are in the office.

Dr. Leguard is growing her practice quickly. She is accepting new patients in our office, as well as treating existing patients of the practice. Dr. Johnston is busy both at home and at the office, and loves balancing her role as a mom with her role at our clinic.

Dr. Hubbel is starting to hand off some jobs (begrudgingly) to the other doctors such as window washing. Keep your eyes peeled for the potential streaks caused by Dr. Leguard’s new work. On a more serious note, Dr. Hubbel is still enjoying his practice on Tuesday and Thursday mornings to treat his existing patients.

You may have also noticed from the whiteboard updates in the office that we are participating in the Big Canada Run. This virtual cross-Canada event is a fundraiser for CHEO (a children’s hospital in Ottawa) and requires members of a team to log their runs and walks on an app. Each member’s respective activity is combined and tracked on a map as we virtually travel through Canada together, from Victoria BC to the coast of Newfoundland. Team members for Hubbel & Johnston Chiropractic include: Karen, Carleigh, Carolyn, Julie, Debra (Hubbel) Leguard, Ainsley Leguard, Chloe Leguard, Dr. Johnston and Dr. Leguard. The event runs from July 1st of this year to June 30, 2022. We’ve logged 1219.4 kms so far in 34 days! 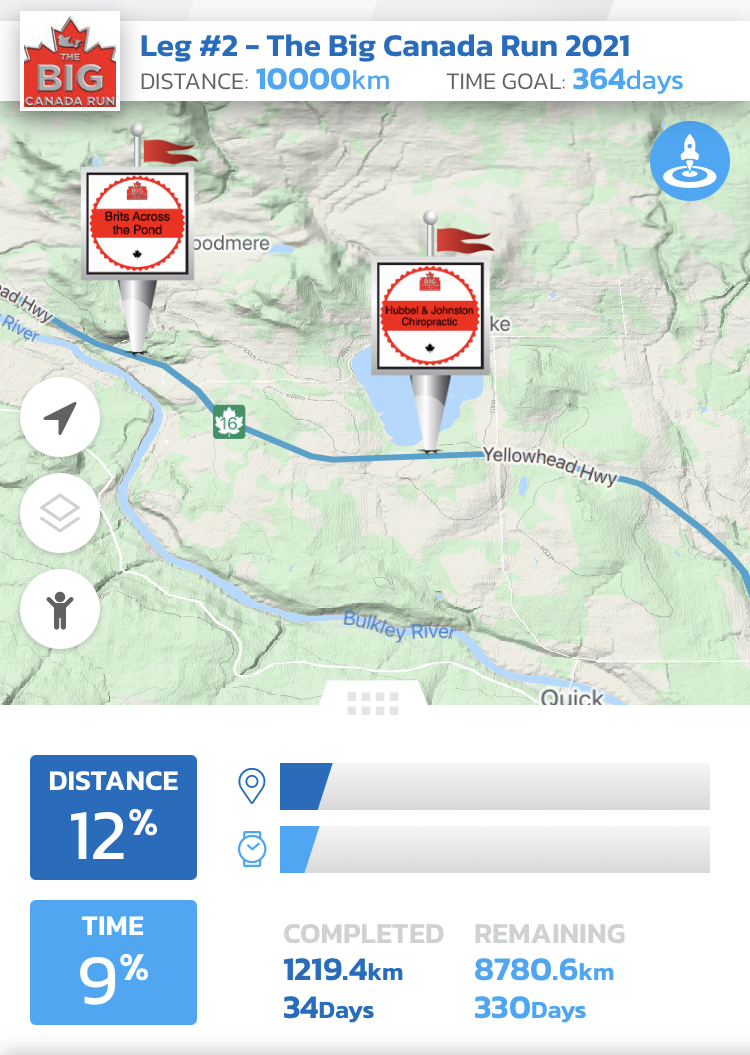